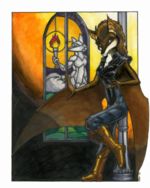 An anthropomorphic bat, Revar's fur is short and reddish-black, her face fox-like, with high cheekbones, huge fennec ears, and a suprisingly delicate nose. It would be pretty, but for the long, thin fangs and unreadable, solid ebony eyes. She stands at five feet even; her wings jointed at the wrist and swept down towards her thighs, supported with fingerlike bones longer than her arm. It dawns on you that she is not just any type of bat, but she is a vampire bat; one of those who children are told stories about, to give them nightmares...

Revar is a character from a series of anthropomorphic stories by Watts Martin. Though she isn't always the main character, she is always a character that will be remembered. She is jaded, sometimes fatalistic, but usually quite realistic. Her temper is sharp and her wit very pointed. She is a good person, at heart, but she has many social and ethical burdens to fight with. Born of a species whose dietary needs are for blood, she is mistrusted by nearly everyone. It's hard to make friends, when they keep wondering if you're going to rip their throats out. Social stigma abounds, and the rumors and legends about the vampire bats are usually quite exaggerated. Most species would rather see the bats dead.

Yet even a predator and a killer can have morality... Choosing to fulfill the undeniable hunger from only murderers and those who have earned death, or, when unavoidable, feeding lightly, so as not to kill an innocent. Even a predator can be decent, if taken on their own terms.

But saying all this still gives only a poor idea of what sort of person Revar is. Read the stories. They're good ones.

Click here for more info on the picture above. To see some stories by Watts Martin, click here.

This web page was created by Foxen